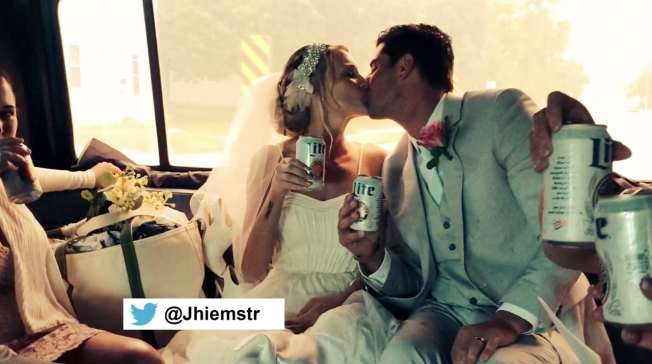 Pop on the kettle, kick up your feet, and warm up this chilly morning with the latest stories that caught our eye so far this week. Here is your mid-week mash-up.

As the summer begins to wind down and kids prepare for their return to school, Miller Lite celebrates some of our greatest summer moments by featuring several pictures shared by fans, from their #ItsMillerTime social campaign, launched last May. Check out the latest ad that features their retro-style cans in the midst of some of summer’s most memerable (and user-generated) moments…

The art of collaboration, turning ideas into actions, and sharing inspiration is the true essense of Pinterest, and the underlying theme behind the new ad promoting their new messaging feature. Have a watch…

While it’s not unusual for film trailers to direct viewers to a Facebook page or promote a specific hashtag, we now see them incorporating the use of apps to provide further details for upcoming films. ‘Men, Women & Children’, a soon-to-be-released film surrounding the secret lives of people online, has teamed up with ‘Whisper’, an anonymous social network where people can share secrets and confessions about themselves, never revealing who they are. We have to admit, we are pretty intrigued…

Tom Hanks’ Typewriter App Brings Back The Art Of Writing

‘Hanx Writer’, a new app launced by Tom Hanks, has quickly become the most downloaded iPad app in the app store. The app turns your iPad into a classy, retro typewriter, giving you the experience of old-school writing at its greatest. Watch the demo for more info:

The Breaking Bad Boys Are Back, Pawn Shop Style

And finally, we couldn’t resist this hilarious spot from Audi, promoting the upcoming Emmy Awards. Here is your weekly fix of humour, we hope you love it as much as we do!