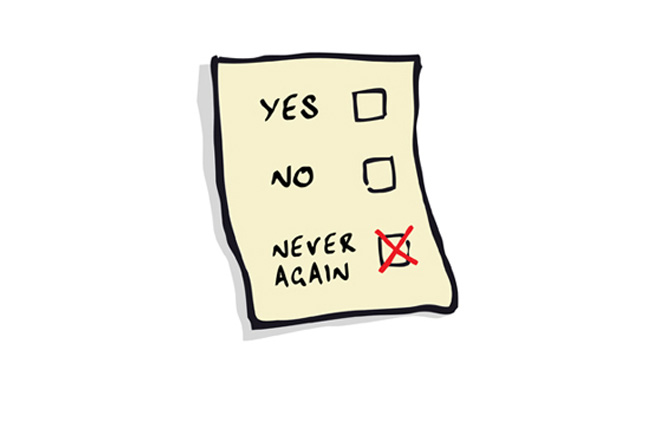 What the parties promised and what they really meant.

What’s the biggest brand in politics now? The polls have shown it’s ABFF. In the World Cup last year the majority of the Irish cheered Anyone But France. Now they’ve voted ANYONE But Fianna Fail.

Democracy by definition means you can never get a political party to have a brand that sticks to any real consistent values. Instead, to try to please all the people all of the time, they chop and change and promise anything and everything.

So we got the same tired promises. Taking their cue from Obama when he faced Bush, they all promoted change – however vague (although I don’t remember Barrack rapping, unlike Labour’s Michael Conagahan, whose Horse Outside parody made your ears weep blood).

Sinn Fein set about rewriting their history to now love everyone on the island, even promising them jobs to show there’s no hard feelings. And who better to offer to burn the bondholders? Who’s going to argue with Gerry Adams? The Greens promised the earth…literally, while Fine Gael were very proud of their digital prowess (despite the PR disaster of the hacking of their website). A section on their site allowed you to send a Valentine Card that proclaimed your “love for your country” as well as your Valentine.

Fianna Fail’s brand was already so badly damaged that their posters were the only example in marketing history when the client had actually asked the advertiser to make their logo smaller. They were microscopic! In the run up to the election in the Irish Times, a Fianna Fáil insider said “The brand is toxic, it’s almost beyond help.” But their brand has gone through so many changes anyway – from Irish language speaking frugal comfort socialists to the party of big business and back to frugal discomfort.

Most interesting, we could see what the start-up brands were doing. One that stood out was young Dylan Haskins. IT STARTS HERE was as brilliant and ambiguous a campaign line as we’ve seen.

All political parties should remember that real brand loyalty is only really reached when people feel that their brands are being loyal to them. So what should the parties really have promised? We gave it an hour of brainstorming. Here’s ‘where they are’ and what they really mean.

We are where we are

Let’s take a look what the political parties promised:

Fianna Fail: Real Plan. Better Future.
(Really? Who were they fooling? We don’t accept that)

Sinn Fein: Sick of the tired old politics of Fianna Fail, Fine Gael and Labour? There is a better way.
(To be honest, this was the best of the ‘change’ lines)

Labour: Jobs, Reform, Fairness and a vision of One Ireland.
(They talked the talk but it still seemed very blue collar)

Dylan Haskins: It starts here.
(What starts here? And where? Doesn’t matter – he was advocating change to the kids)

Sinn Fein: EU and whose army?
Labour: Let’s keep Public Sector Ireland working.
Fianna Fail: No plan. No future.
Fine Gael: We’ve got the solution. But you’re not going to like it.
Independents: Keeping the parties in check (as long as we get our cheques).
Green: Ask not what we can do for your country,
But what you can do for the planet.
United Alliance Left: Nothing Left.
Dylan Haskins: Vote me for Hall Monitor and the Milky Bars are on me!

3 Responses to “Our politicians jump on the brandwagon”