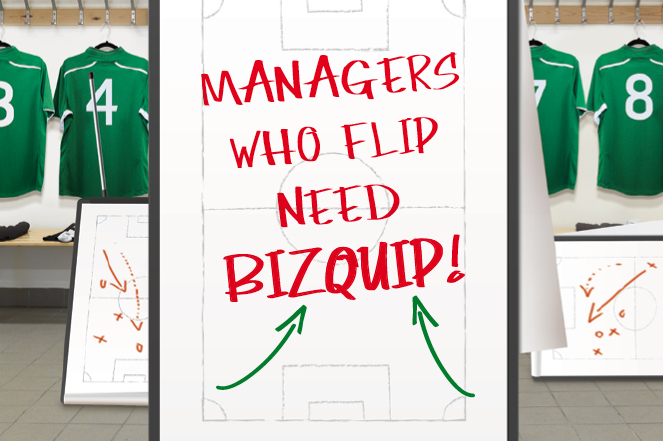 Inspiration can come at the strangest times–last Sunday morning to be precise, the day after the media started leaking the story that Martin O’Neil and Roy Keane were rumored to be forming a ‘deadly’ double act and take charge of the Irish soccer team. I say ‘deadly’ as I’m sure you’re all familiar with Mr. Keane’s, let’s say, ‘fierce determination’! So ‘fierce’, in fact, that during his days of managing Sunderland (BOOOOOOOOOO!) he couldn’t get over the fact that his struggling team weren’t as good as he was in his playing days and used to kick merry hell out of his tactics flip charts!

So, back to last Sunday morning. My son plays soccer for Malahide United (where the Irish team train) and during half time, the ‘soccer dads’ were having a chat…

“OK, everyone…” I said to them, “Roy Keane and Martin O’Neil…..discuss”. “Aaaghhh”, was the general response, “It’ll be carnage”, to which I quipped “I hope Malahide United have their flip charts insured!” And so, an advert was born, visualised first thing Monday morning, presented to Jim Leyden at Bizquip, and you’ll see it on page 15 in this weekend’s Sunday Business Post!

‘Back of the net’, I believe the saying goes.

I’ll finish with saying ‘all credit to unexpected double acts’ and wish Martin and Roy, but especially Bizquip and Dialogue the very best of luck.