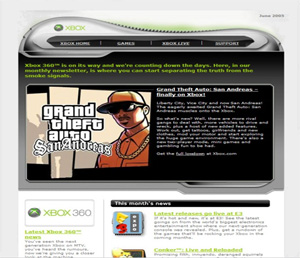 Ireland has one of the largest per capita gaming audiences in the World. Dialogue invited a number of core Gamers to Gaming symposiums held in our offices over a series of months. We gained their trust and got to understand the insights that drove their passion, purchasing and referral decisions.

A series of events were created where up to 300 gamers participated in national competitions against each other while at the same time maintaining their superior knowledge of the gamming industry by getting early insights of up and coming game and console releases.

Gamers willingly signed up to timely updates, helping them to maintain their gaming knowledge which they shared with their tight communities. This ‘leader status’ (keeping them ahead of the curve) was their key personal driver. Customised EDM’s, based on game preference segmentation were shared during the initial sign up process which allowed us to be highly relevant in all future communications. 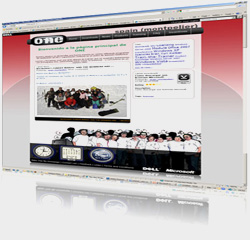 We needed to keep staff ahead of the knowledge curve in a constantly changing environment. We met staff to determine their key needs and their preference was for a hub with daily updates.

We developed an ASP.NET consensus-based solution with custom-built CMS. It included a personalised look and feel for each of the 18 regions across five languages. Educational videos were developed and uploaded to train staff and promote weekly offers that helped to increase sales. In-house league tables were highly competitive with country and individual staff competitions visible to all which raised sales at alarming rates.

We’ve all done it before; worked late, weekends and even bank holidays, all of which wouldn’t be let’s say, “ideal”! But how far would you go for your place of work? How about getting the company logo tattooed on your body? That’s exactly what they’re doing in the New York real estate agency Rapid Realty. But it’s not all one way. Whoever is prepared to get themselves ‘inked’ will in return get a 15 percent wage increase. So would you do it? Me? Well I’m thinking about ‘Welcome to The Dialogue Network, have a nice day’!!! 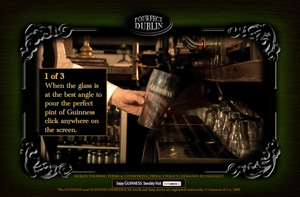 Participants made multiple attempts with advice from local virtual bartenders helping them perfect the tilt angle of the glass, the timing of the pour and the all-important settling process.

Players sent their scores to friends with their initials personally etched into the head of the pint inviting them to enjoy a small flavour of Dublin and get involved in this addictive game.

A league table showed how you performed against your friends all over the world with country winners being invited to Dublin for city break holidays. Addictive!

You can view the viral here.

We developed the brand concept and creative for the Edmund Rice Beyond 250 campaign in 2012 and it has been a huge success raising over €1 million. The anniversary campaign is coming to an end and we are now working on a version of the site we developed for the Indian market. 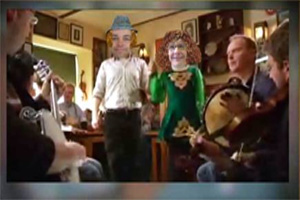 Dialogue developed a global interactive St. Patricks Day
e-card, encouraging past visitors to refer Ireland as a holiday destination amongst their close friends, family and colleagues.

We invited visitors to drop a personal head shot of themselves in a typical Irish setting (pub sing songs and Irish dancing) and forward these interactive videos to their loved ones. Recipients were incentivised to share the cards with as many friends as possible with chances of winning a range of prizes including trips to Ireland. The more names gathered, the greater number of entries you received.

The viral reached all corners of the globe with a significant lift in new emails gathered for future online targeted activities.

You can see the viral here.

Trendwatching suggested at the start of the year that there would be an increase in Digital Detoxing, where people start to switch off their social media accounts and always-on digital devices. Not necessarily for good, but for digital holidays to get away from what can be an overwhelming always-on culture. People say digital detoxing can be as difficult as giving up smoking!

Digital detoxing is said to help people relax, declutter their brains even make you happier! There are apps out there to help to take the plunge like Digital Detox which irrevocably disables your Android phone for a period of time you specify. There are Digital Detox holidays with… “St. Vincent and the Grenadines asking travelers to leave their technology at home as part of their digital-detox vacation package. Included in the package is a pre-mailed guidebook explaining how to function on a trip without technology and features an onsite life coach who provides advice on how not to let technology control one’s life. ” (Source: Forbes)

Closer to home, Kit-Kat in Amsterdam have tapped into the Digital Detox trend with their Free No- Wi-Fi Zone campaign. The idea is simple and taps neatly into the brand promise:

Free WiFi is available everywhere we go. People are constantly online, busy with their electronic gadgets all the time. At Kit Kat, we saw that as an opportunity to give people a break. So instead of offering Free WiFi like every other brand, we created a Free No-WiFi Zone. A big sign with a small WiFi jammer that blocked all signals within a five meter radius. By doing that we encouraged people to read a newspaper, a real book or have a genuine conversation again. All while munching on a Kit Kat.

It’s no secret that social media sites are quickly replacing traditional news sources. People want news, and they want it now, as it happens. Social media provides that immediacy that we’ve come to expect, but what happens when we realise the things we read aren’t necessarily the things that actually happened?

Recently, I have begun to notice that I’m more apt to follow news stories via Twitter when I want to stay up-to-date on the most recent information. Last week was no exception as I closely followed the events that took place at the Boston Marathon via Twitter and Facebook. I quickly took note that conflicting stories were being reported by different people. Was there one explosion or two? Was the fire at the JFK Library associated with the events that took place at the finish line of the marathon or was it an isolated event?

The race to report things first has led to many news sources reporting the wrong information. Stories about death tolls, suspects and alleged arrests of those responsible all made their way into my newsfeed last week, and all contained incorrect information. In addition to all of the misleading stories, I was shocked at the amount of pictures and memes that floated around Facebook associated with fallacious stories of things that never happened, all to simply get ‘likes’, ‘shares’ and ridiculous attention.

All of the false reports of an arrest being made 2 days after the attack, caused the FBI to release the following statement:

“Contrary to widespread reporting, no arrest has been made in connection with the Boston Marathon attack,” reads the FBI’s unusual statement.

“Over the past day and a half, there have been a number of press reports based on information from unofficial sources that has been inaccurate,” it continued. “Since these stories often have unintended consequences, we ask the media, particularly at this early stage of the investigation, to exercise caution and attempt to verify information through appropriate official channels before reporting.”

I, for one, plan to leave the false news stories, conspiracy theories, and useless propaganda to the people who buy into that nonsense and vow to continue using my 140 characters wisely and accurately.

I came across this on Twitter and the name grabbed my attention. So, I checked it out. What is it all about, you ask? Well the premise is, often the first idea you have is the best. So a brief is set and you (anyone in Twitter land) have one minute to work on it! As they say themselves:

The beauty of One Minute Briefs is that the ideas that come out of them can be really, really, shit or really, really, good. But you’ve only spent one minute on it so it’s all good whatever happens.

And if your work gets picked up, you get paid!

We love this approach and actually use it here in Dialogue as part of our innovative creative problem solving solution we offer clients. We call it our first burst, we keep all our first bursts and as we work through our projects we often find something that had energy at that early stage keeps it as we work it through.

Here are some recent One Minute Briefs and examples of the work: